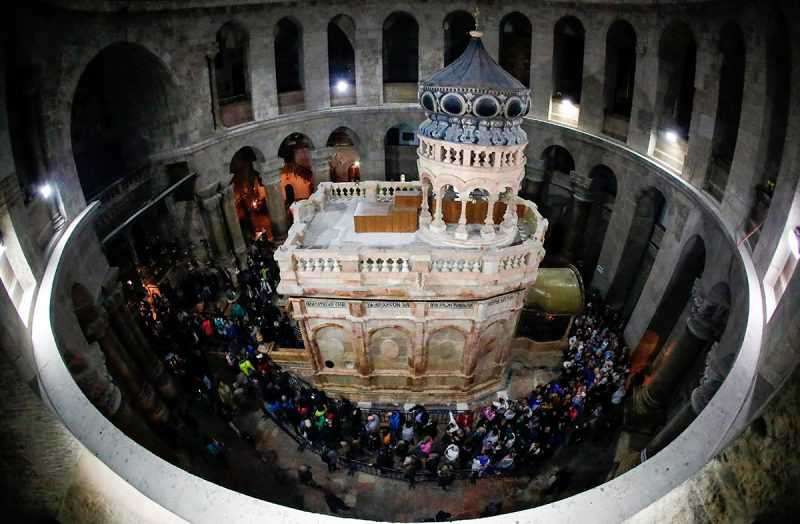 A tomb which is almost 1,700 years (shown by scientific study) is said to hold the body of Jesus Christ according to legend.

Whether the tomb ever truly held the body of Jesus is unknown. The limestone bed dates to almost 300 years after the death of Jesus. Moreover, there are also a number of other sites which claims to hold the "tomb of Jesus."

The tomb of Jesus which is located within the Church of Holy Sepulchre in Jerusalem is covered by a shrine which sometimes called the Edicule. According to legend, Helena, the mother of Roman emperor Constantine the Great, discovered the tomb around the year 327. Constantine legalized Christianity throughout the Roman Empire and supposedly converted to Christianity before he died. According to The legend, the Romans the shrine and the church are built by the Roman to protect the tomb of Jesus.This church has been destroyed, renovated and rebuilt several times over the past 1,700 years.

Today, the shrine which was once built to protect the tomb is now in poor shape and is in danger of collapse. A team that comprised of scientists supported by the National Geographic Society has been conducting conservation work in the shrine and its tomb in order to save it. Through this work was going on, the archaeologists opened the tomb of Jesus for the first time in centuries. The tomb has been sealed with marble slabs since at least A.D. 1555 to avert damage which can be caused by the visitors and vacated the tomb. By conducting such conservation work, they found the remains of which looks like to be a limestone bed that, as legend says, may have held the body of Jesus.

Tests using a technique called optically stimulated luminescence (OSL) of mortar from the limestone bed revealed when the quartz within the masonry was last exposed to light. It was revealed by the results that the bed was constructed around A.D. 345, during or shortly after the reign of Constantine the Great. The test results were released today (Nov. 28) by the National Geographic Society.

Archaeologist Martin Biddle, who has studied the tomb extensively, told National Geographic in one of his interviews that the date is spot-on for whatever Constantine did.

Today, the Church of the Holy Sepulchre is a site of pilgrimage for Christians.

A study reporting the test results will be published in an upcoming issue of the Journal of Archaeological Science: Reports. Scientists after completing the conservation work are thinking of a material which can replace the marble hiding the tomb so that the visitors could see inside the tomb.